Nancy Savoca’s latest film, “Union Square” is one of those unique films where viewers think they have the film pegged, but then are surprised by a number of twists and character revelations. Humor is mixed with tension between two estranged sisters with quite a rewarding outcome.

The tale is simple enough, two feuding sisters, Lucy (Oscar winner Mira Sorvino) and Jenny (acclaimed Broadway actress Tammy Blanchard) unexpectedly reunite for the two days preceding Thanksgiving and then during the holiday itself. Lucy is bigger than life – a New York/New Jersey “Housewives” type springs to mind as she shops Filene’s while publically having a devastatingly hurtful cell phone conversation with her lover. A few more heated calls are followed by a very messy meltdown in Union Square park.

Jenny on the other hand is extremely controlled, living in a spare modern loft overlooking Union Square. She and her fiancé Bill (Mike Doyle) operate a healthy Millstruck Natural Foods business from their loft. When Lucy shows up unannounced, looking through her door’s peephole, a frustrated Jenny feels obliged to let her sister in. Awkwardness abounds as a short, unannounced visit turns into, “I need to stay a few days.” 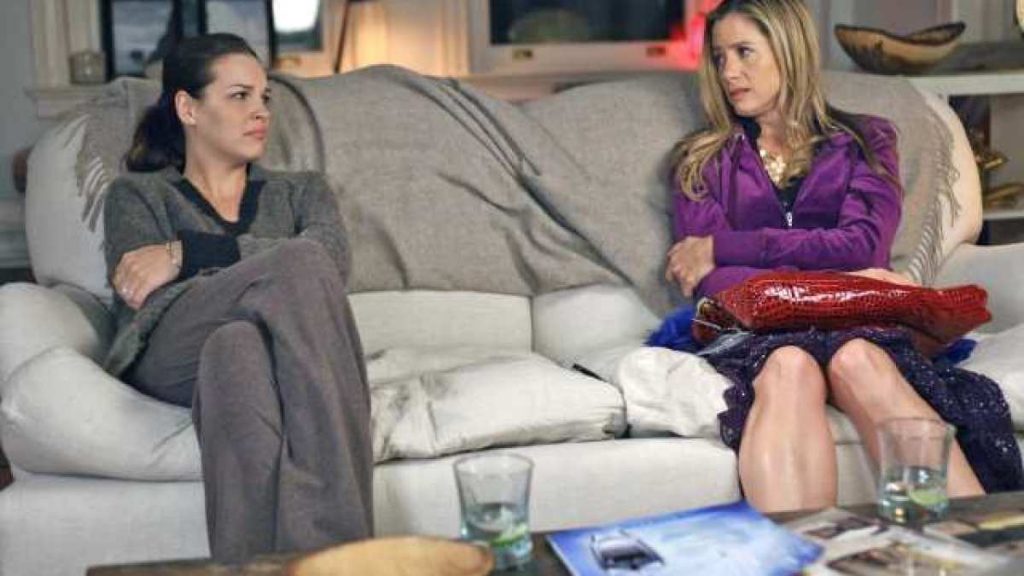 Of course the two women mix like oil and water. Lucy commits crimes against Jenny’s wood floors and air with her high heels and cigarette smoke, while Jenny cops to not being entirely honest about her past. Director Savoca remarks in the film’s production notes “…the characters fit a stereotype and you can quickly judge them. But by the end, you are in it and you are with them – for better or worse.” It’s true as the skilled director, script and actresses pull viewers into the sisters’ emotional vortex.

Another striking element about “Union Square” is its streamlined production calendar. Savoca (“True Love,” “Household Saints”) and screenwriter Mary Tobler tailored a script to shoot in producer Neda Armian’s Union Square loft. But the real kicker is that the film was scheduled to shoot for 10 days (it ended up twelve). That’s all the budget allowed. Says producer Richard Guay in the production notes, “What the story may have lacked in expansive exteriors and varied locations, it more than made up for in depth of character and emotional punch.”

Director of photography Lisa Leone worked closely with Savoca for “Union Square,” their fourth film together (including “Dirt” and “Reno: Rebel Without a Pause”). They shot on the Canon 5D HD camera and averaged 9 script pages a day. Actor Doyle, in the film production notes, explains the short shooting schedule and slim crew, “… was great because everyone was prepared and working at their top game, so you had to make choices and commit.”

Mira Sorvino adds, also from the film’s notes, “Union Square” proves, “…that a terrific movie can be made in an unbelievably short amount of time, with no trailers, trucks, a skeleton crew, etc… It kind of proved that a great director, script and willing cast are all you really need to make a powerful piece of cinema.”

Heed that statement filmmakers, less really can be more when a talented group of artists set their minds to it. Nancy Savoca’s brisk (at 80 minutes) “Union Square” is a refreshing course in simple, but powerful cinema. Credit goes too, to her talented crew and cast including Sorvino, Blanchard, Doyle and Michael Rispoli, Daphne Rubin-Vega, and Patti LuPone.

For other film reviews by Lori Huck, check out:

L.A. Film Fest: World premiere of ‘Seeking a Friend for the End of the World’